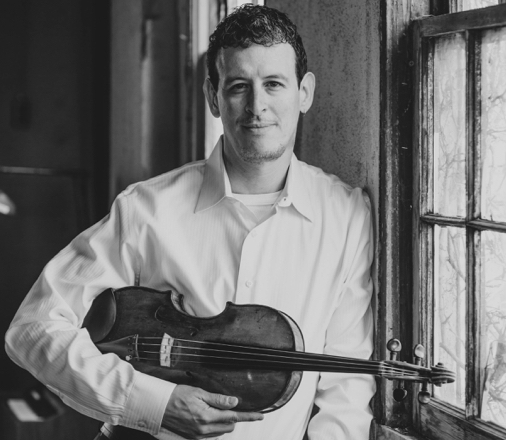 Violist Luis Enrique Vargas is a member of the Euclid Quartet since 2001 and teaches viola and chamber music at Indiana University South Bend where he was appointed Lecturer in 2007.

Born in Venezuela and brought up in a family of musicians he was first introduced to the music world at age 14 when he became a member of the internationally renowned “El Sistema” of the Venezuelan Youth Orchestra. As a member of “El Sistema” he was an active educator throughout Venezuela, and an active performer and chamber musician. He studied at the Simon Bolivar Conservatory of Music in Venezuela.

He moved to North America where he pursued a Diploma in Chamber Music at Wilfrid Laurier University in Ontario, Canada, guided by the Penderecki String Quartet later residing in the United States. While in the US he pursued a Master’s Degree in Music Performance from Miami University of Ohio and a Performer’s Certificate from Northern Illinois University.

Throughout his career, Mr. Vargas studied and was coached by many world-renowned musicians. Among them are Richard Young, Gerard Causee, Li-Kuo Chang, James Dunham, Michael Tree, and members of the Penderecki, Vermeer, Cleveland Julliard and Emerson string quartets.

He is currently a member of the National Academy of the Recording Arts and Sciences (the Grammy® Awards organization), as well as an adjudicator for the Fischoff National Chamber Music Competition. He served as a member of the board of directors of the Hugo Kauder Society and advisor for their International Music Competition. He has, also, adjudicated for the Music Teachers National Association Chamber Music Competition to be held at the MTNA National conference in Chicago, IL. Other teaching positions have included the Sulzbach-Rosenberg International Music Festival in Germany and the Rocky Ridge Music Center in Colorado, USA.

With the Euclid Quartet he was awarded the Bronze Medal at the Osaka International Chamber Music Competition in Japan in 2005, the Grand Prize at the Hugo Kauder International Music Competition at Yale University in 2004 and second place at the Chamber Music Yellow Spring Competition in Ohio in 2003. Relevant performances with the Euclid Quartet include venues such as Izumi Hall in Osaka, Japan, Weill Recital Hall and Zankel Hall at Carnegie Hall in New York City, Harris Hall at the Aspen Music Festival and the Library of Congress in Washington, DC among others.

He was a member of the Cuarteto America performing extensively in Venezuela, Luxembourg, Germany, Colombia, Mexico, Canada and the United States. As a member of this ensemble he attended international music festivals such as Norfolk (CT), Great Lakes (MI), Round Top (TX), and performed at the International Music Symposium “Strings of the Future” in Ottawa, Canada in 1997.

Among the recordings with the Euclid Quartet, the cycle of Bela Bartok’s string quartets in two separate discs under Artek Label received the most acclaim by the Gramophone, MusicWeb International and the American Record Guide. Other highly regarded recordings include the most recent release of Antonin Dvořák’s “American” string quartet paired with Winton Marsalis’ “At the Octoroon Balls” on Afinat Level. A new recording of the string quartets No. 1 by Edvard Grieg and Claude Debussy is expected to be released in 2020.

We opened the applications for LIMF ON SCREEN – our online edition! Please click here to APPLY.
On May 20, we will launch the COMPOSITION COMPETITION.
Keep following us to have news about our CONCERT SERIES MUSICA NEI BORGHI, organized and promoted by the Comune di Fivizzano. The schedule will be launched in June.
We look forward to meeting you soon, in person or online!