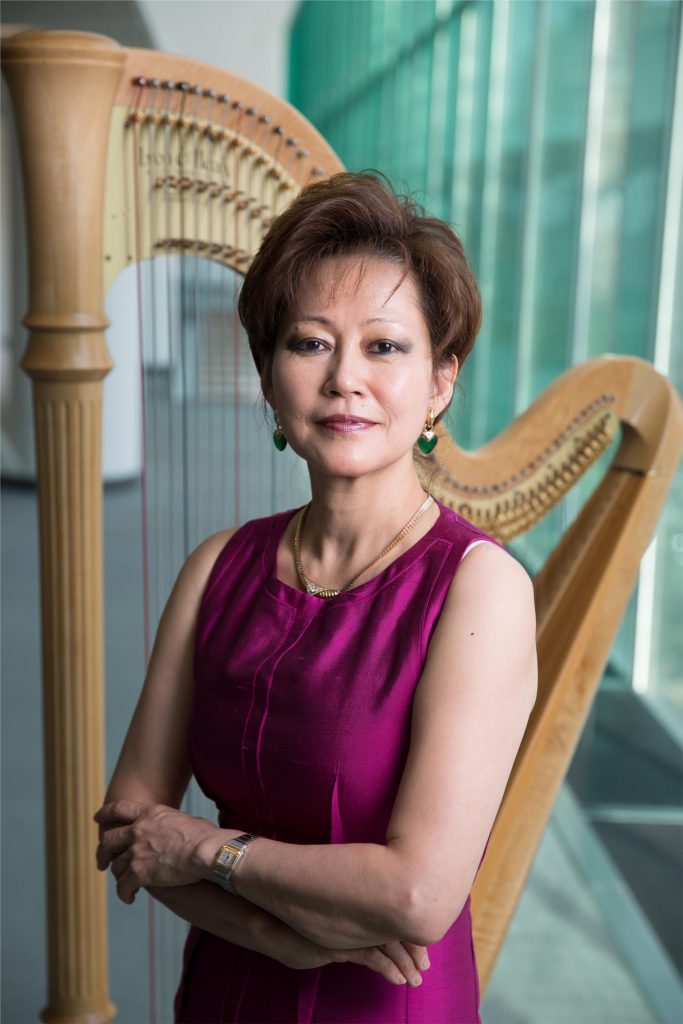 First prize winner of the Elizabeth Herbert Hobin Harp Competition in 1987, Kyunghee Kim-Sutre is recognized as one of the finest harpists of her generation. Consistently performing in the most prestigious of international venues, both as a soloist and in chamber music, the broad range of cultural backgrounds that comprise her education – Korean, French and American – beautifully color her extensive repertoire, from music by Dussek to that of living composers.

With Guillaume Sutre, she is first prize winner of the ‘Lily Laskine’ Chamber Music Competition in 1991, and for more than twenty years, the Duo Sutre-Kim have extensively explore and perform the relatively esoteric repertoire for violin and harp, thus renewing the tradition of the Salon de Musique, an intimate and lively concert format popular during the time of the creative and merry atmosphere of the Belle Époque.

Some of her recitals have been broadcast by the channel Muzzik (Festival Ravel, 1998), and by the Arte Channel (Flâneries Musicales in Reims, 1999). She works with many of today’s most talented musicians, including Raphaël Oleg, Laure Colladant, Jocelyn Aubrun, Ronald Leonard, David Grimal, Michel Moragues, the Ysaÿe Quartet, the Ludwig Quartet and the Voce Quartet.

Her album of the Jan Ladislav Dussek and Sophia Corri Dussek Sonatas for Solo Harp has garnered critical acclaim and has quickly become a reference for that repertoire. Her recent Sonarti CD, Joseph Woelfl: The Paris Years (1801-1805), featuring chamber works by the Austrian composer Joseph Woelfl, was lauded by musical critics, including the Diapason magazine with a 5 of Diapason, as well as her solo harp album “La harpe consolatrice” (The consoling harp), featuring works written by French composers during World War I and recorded for the French label Hortus. Pursuing her quest for forgotten repertoire, she recorded the Nocturnes Concertants for Harp and Violin, composed in collaboration by harpist Charles Bochsa & violinist Rodolphe Kreutzer, and an album also featuring only original pieces for Violin and Harp, “Parfums d’amours” – Duo Sutre-Kim 25th Anniversary. Her new solo album “Airs Favorite for the Harp” is dedicated to the composer Sophia Corri-Dussek and includes no less than a dozen works never before recorded.

Born in Seoul, Kyunghee Kim-Sutre began her musical studies at the age of eight and later entered Seoul National University where she studied with Kyo-Sook Lee. Accepted at the esteemed Curtis Institute of Music, she became the student of Marilyn Costello (soloist with the Philadelphia Orchestra) for four years. After graduating from Curtis, she pursued her musical education with Susan McDonald at The Jacobs School of Music of Indiana University and Brigitte Sylvestre at the Paris Conservatoire Supérieur de Musique where she received a Premier Prix de Harpe à l’Unanimité. Regularly invited to give Masterclasses and participate in juries of competitions around the world, Kyunghee Kim-Sutre is in 2019 the inaugural professor of harp at the Tianjin Juilliard School in China. Kyunghee Kim-Sutre plays a Lyon & Healy Style 11 Gold, as well as a rare 1905 instrument made by the famous French harp maker, Sébastien Érard, who invented the double-function pedal harp we know today.