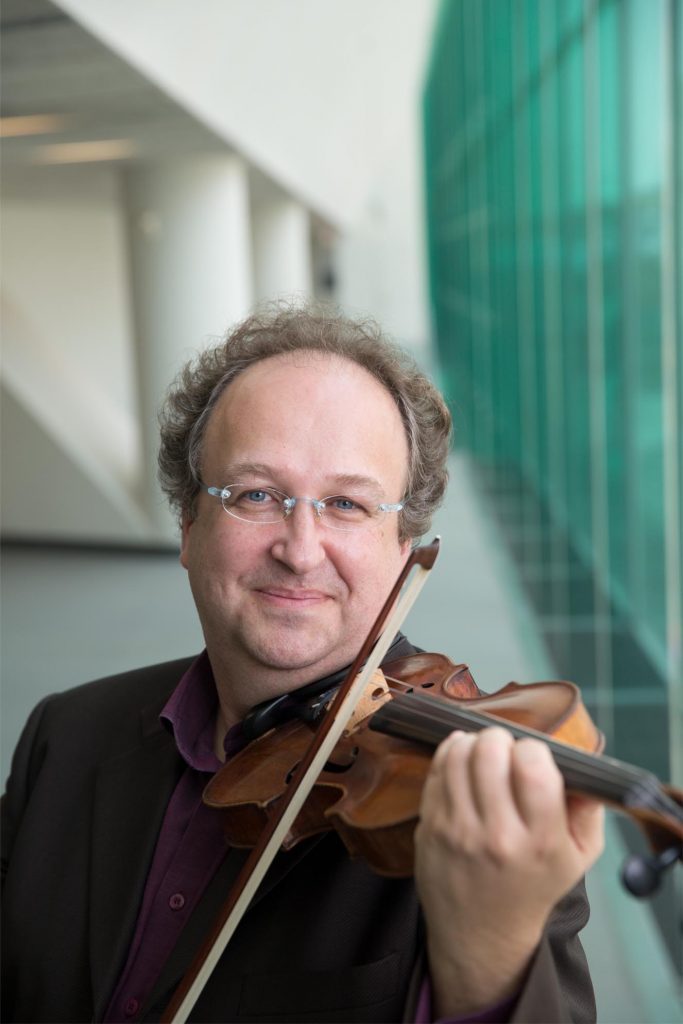 Mr. Sutre was attracted to chamber music early in his career. In 1986, he founded the Trio Wanderer; ten years later he became the first violinist of the Ysaÿe Quartet, a post he held for almost twenty years until their farewell concert in 2014 in Paris’ Cité de la Musique. His vast repertoire of over 500 works features all the string chamber music of Beethoven, Brahms, Schumann and all 68 Haydn quartets. He has performed at many of the most prestigious venues around the world with such performers as Nelson Freire, Lynn Harrell, Gary Hoffman, Leonidas Kavakos, Yo-Yo Ma, Jean-Claude Pennetier, Michel Portal, Pascal Rogé and Sir Yehudi Menuhin. With his wife Kyunghee Kim-Sutre, he formed a violin and harp duo, an ensemble through which they both continually explore and deepen their existing repertoire.

His recordings for Sony Classical, Decca, Harmonia Mundi, Naïve, Aeon, Ysaÿe Records, Hortus and Sonarti have received the highest distinctions in France and internationally. His live recording of the complete duets of Haydn and Mozart with violist Miguel da Silva has been hailed by critics as definitive, his CD featuring the quartets of A. Boucourechliev was awarded the Charles Cros Academy’s Grand Prix du Disque, and his two recent albums, J. Woelfl: The Paris Years (Sonarti) and Pensés Intimes (Hortus / WWI), received the 5 of Diapason.

Professor of a string quartet class at the Paris Conservatoire à Rayonnement Régional, then Professor of Violin and director of string chamber music at the UCLA Herb Alpert School of Music in Los Angeles, he joined the inaugural faculty of The Tianjin Juilliard School in 2019. He has taught master classes at Juilliard, IU Bloomington Jacobs School of Music, San Francisco Conservatory of Music, University of South California, Oberlin Conservatory of Music, McGill Schulich School of Music, Aldeburgh Britten-Pears Foundation, Zeister Muziekdagen, Festival Internacional de Inverno in Campos do Jordão.  Mr. Sutre is passionately committed to imparting his knowledge upon musicians of younger generations. He regularly performs with his students and in 2014 he co-produced the Calidore Quartet’s debut CD. He regularly serves on juries of prestigious competitions, such as the Long-Thibaud International Violin Competition in Paris, the A. Postacchini International Violin Competition in Italy and the International String Quartet Competition in Bordeaux.

Guillaume Sutre began his studies in Douai, France; he then entered the Conservatoire National Supérieur de Musique de Paris at age fourteen with Gérard Poulet and Jean-Claude Pennetier. After finishing his studies in France, he attended Indiana University at Bloomington to study with Josef Gingold, Franco Gulli, Menahem Pressler and Janos Starker. He subsequently studied in Cologne with the Amadeus Quartet.

Guillaume Sutre plays a violin made by Gregorio Antoniazzi, an enigmatic Venetian maker from the eighteenth century.