Christine’s international career includes engagements as Mimi in La Bohème over several seasons with the Leipzig Opera in Germany, Schönberg’s Pierrot Lunaire (described as “colourful and evocative” by the Glasgow Herald with the Paxton Chamber Music Festival in Scotland, a 200th Anniversary Concerto Verdiano with the Narni Music Festival in Italy, and several seasons of concerts in Granada and Madrid with the Festival de Canción Española. She has premiered many new works by living composers, including Richard Thompson’s song cycle The Shadow of Dawn and the New York premiere of his opera The Mask in the Mirror, Andrew Rudin’s Masha’s Arias, and works by Michael Rose, Kareem Roustom, Richard Cameron-Wolfe, Steve Gerber and Zaid Jabri with the Brooklyn New Music Collective. In 2008 she sang the world premiere of Mohammed Fairouz’s Tahwidah, written for her and internationally celebrated clarinetist Kinan Azmeh, and in 2013 curated and performed in a concert at the Library at Lincoln Center dedicated to classical works by Arab composers, entitled “Nearer to East: Chamber Music from the Arab World.” She speaks five languages, sings in ten, and has given numerous solo recitals featuring a wide variety of repertoire and languages at such venues in New York as the Trinity Church Concert Series, the Library at Lincoln Center, Merkin Concert Hall, the Old Stone House, as well as the Edinburgh Fringe Festival and in venues in Leipzig.

Radio appearances include WNYE and WBAI (New York City) and KRZA (New Mexico). Her first recording, Christine Moore – Arias with the Bulgarian National Radio Symphony Orchestra (Musical Concepts) was released in 2006, and she awaits the release of her latest recording, From Al Andalus to the Americas–An Odyssey of Spanish Song (Meridian Records, UK).

As a teacher, Christine has over 23 years of experience in the private studio realm and was a faculty member of the Brooklyn Conservatory of Music for 14 years, where she taught private voice, vocal performance, and opera theatre. Several of Christine’s students have won or placed in voice competitions, including the Schmidt, National Association of Teachers of Singing (NATS), and Hal Leonard competitions, and have also been accepted with scholarship to such institutions as Juilliard, Oberlin, Manhattan School of Music, Mannes/The New School, Eastman, among others. Since 2017, she has worked with selected high school music departments in New York City to vocally train their most talented students, and is a mentor-teacher with ArtSmart, an organization co-founded by internationally-renown tenor Michael Fabiano that provides lessons and mentorship to middle- and high-school students in underserved neighborhoods in cities across the country. In 2018 she joined the faculty of American Voices, a U.S. non-profit organization that promotes American music and brings musical instruction to hard-to-access countries.

Her students with American Voices hail from Lebanon, Eritrea, Syria and Iraqi Kurdistan. In 2016 she co-founded Lyric Artists of New York (LANY), a not-for-profit singing collective that provides performance opportunities and stage experience to both young and seasoned singers. LANY performances since its founding include Verdi’s Aida with orchestra, Opera Night at the Old Stone House series, and the Songs at Sunset outdoor concert series. Christine has been a (proud) Teaching Artist with the Lunigiana International Music Festival since its inception in 2018. 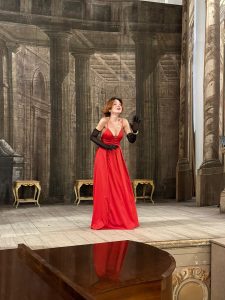